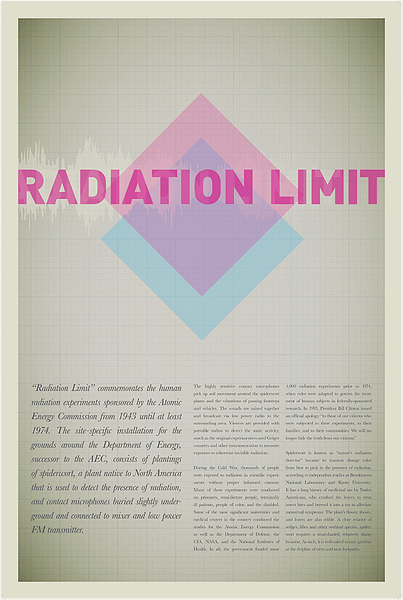 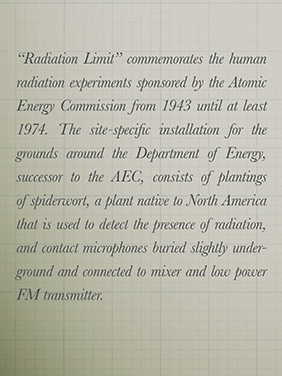 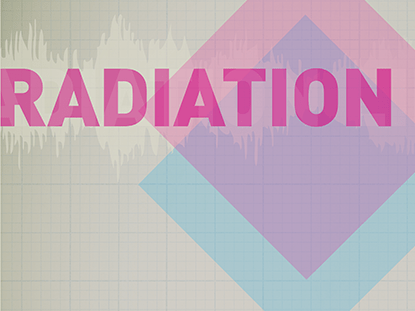 Radiation Limit commemorates the human radiation experiments sponsored by the Atomic Energy Commission from 1943 until at least 1974. The site-specific installation for the grounds around the Department of Energy, successor to the AEC, consists of plantings of spiderwort, a plant native to North America that is used to detect the presence of radiation, and contact microphones buried slightly underground and connected to mixer and low power FM transmitter. The highly sensitive contact microphones pick up soil movement around the spiderwort plants and the vibrations of passing footsteps and vehicles. The sounds are mixed together and broadcast via low power radio to the surrounding area. Viewers are provided with portable radios to detect the sonic activity, much as the original experimenters used Geiger counters and other instrumentation to measure exposure to otherwise invisible radiation.

During the Cold War, thousands of people were exposed to radiation in scientific experiments without proper informed consent. Many of these experiments were conducted on prisoners, semi-literate people, terminally ill patients, people of color, and the disabled. Some of the most significant universities and medical centers in the country conducted the studies for the Atomic Energy Commission as well as the Department of Defense, the CIA, NASA, and the National Institutes of Health. In all, the government funded some 4,000 radiation experiments prior to 1974, when rules were adopted to govern the treatment of human subjects in federally-sponsored research. In 1995, President Bill Clinton issued an official apology “to those of our citizens who were subjected to these experiments, to their families, and to their communities. We will no longer hide the truth from our citizens.”

Spiderwort is known as “nature’s radiation detector” because its stamens change color from blue to pink in the presence of radiation, according to independent studies at Brookhaven National Laboratory and Kyoto University. It has a long history of medicinal use by Native Americans, who crushed the leaves to treat insect bites and brewed it into a tea to alleviate menstrual symptoms. The plant’s flower, shoots, and leaves are also edible. A close relative of sedges, lilies and other wetland species, spiderwort requires a semi-shaded, relatively damp location. As such, it is well-suited to rain gardens at the dripline of trees and near footpaths.