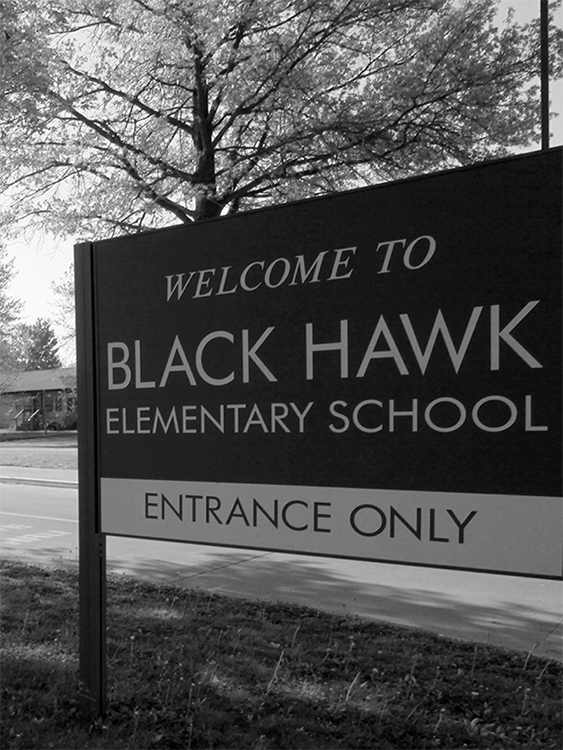 Re-collecting Black Hawk is a book-length, image-text essay exploring the cultural and political landscapes of the Midwest. It brings together roughly one hundred seventy photographs of historical markers and monuments, organizations, sports teams, consumer products, businesses, parks, subdivisions and other places that reference the 19th century Sauk leader Makataimeshekiakiak, more commonly known as Black Hawk. These photographs are arranged geographically and organized into chapters by state (Iowa, Illinois, and Wisconsin). Each image is paired with an appropriated text drawn from sources as wide ranging as press releases and scholarly histories, government reports and advertisements, and poetry and recipes published in tribal newspapers. Interwoven throughout are contributions by and interviews with activists, scholars, and tribal officials, who, in some cases, reflect on the image-text strategy and, in other cases, ground it in specific, current struggles around decolonization, self-determination, and cultural revitalization.

Re-Collecting Black Hawk is both a call and an attempt to practice landscape differently. It proceeds by staging a series of encounters between image and text, each with different implications in the realm of political imagination. The book’s title suggests holds a double meaning. In the most literal sense, it connotes the remembering of something past. The hyphen, however, hints at another, more active meaning. To re-collect is to gather again or to collect anew in the present. Or, following Bruno Latour, to re-collect is to reassemble Black Hawk to account the disconnect between past and present, absence and presence.