In seven years at the the University of Iowa, I organized well over a dozen special events – visiting artist lectures, screenings, exhibitions, and performances – in support of my classes. A selection of the event fliers and descriptions are archived here. Click on images to enlarge. 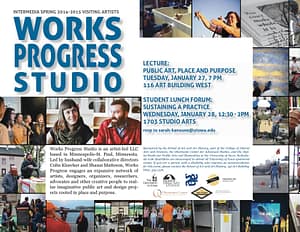 Shanai Matteson is a writer, artist and arts organizer who leads and supports collaborative public art and design projects. She’s interested in work at the margins of established fields and practices, and believes that edges and intersections provide fertile ground for artists and designers to learn and create, with and in community. In addition to her role as Collaborative Director of Works Progress Studio, Shanai writes about artists and engagement, produces and directs documentary films, and consults with a wide range of organizations. Shanai is the Artistic Director of Public Art Saint Paul’s City Art Collaboratory, a fellowship program for artists and scientists working with and on the Mississippi River and other ecologically-focused public art and engagement projects. In 2013 Shanai was awarded a Bush Fellowship to pursue her artistic and environmental leadership work.

Colin Kloecker is an artist, designer and filmmaker who works at the intersection of civic engagement and public art-making. He loves projects that invite participation, inspire new connections, encourage self-reflection, and enable collaborative meaning-making. He believes we can create more resilient, playful, and supportive communities by daylighting and nourishing knowledge and creativity where it already exists. Colin was a 2011 Fellow in the Creative Community Leadership Institute at Intermedia Arts, and was awarded a 2014 Metropolitan Regional Arts Council Next Step grant to make a short film with employees of the Metropolitan Wastewater Treatment Plant in Saint Paul. Everyday he strives to see beautiful possibilities in the systems of the city and to make interventions and provocations in our collective civic imagination. 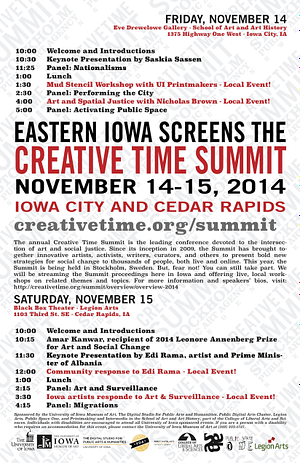 The annual Creative Time Summit is the leading conference devoted to the intersection of art and social justice. Since its inception in 2009, the Summit has brought together innovative artists, activists, writers, curators, and others to present bold new strategies for social change to thousands of people, both live and online. This year, the Summit is being held in Stockholm, Sweden. But, fear not! You can still take part. We will be streaming the Summit proceedings here in Iowa and offering live, local workshops on related themes and topics.

Laurie Jo Reynolds is an artist, policy advocate and researcher whose work for the past two decades has countered the media’s demonization of people in prison. Her work takes the form of “Legislative Art,” which participates and intervenes in government systems, with the goal of concrete political change. Through the grassroots organization Tamms Year Ten, Reynolds collaborates with men formerly and currently incarcerated at the Tamms supermax prison, their families and other artists. A former Soros Justice Fellow, Laurie Jo Reynolds received both the Creative Capital Grant and the Leonore Annenberg Prize for Art and Social Change in 2013.

Laurie Jo Reynolds appeared at the University of Iowa with two collaborators from Tamms Year Ten: Darrell Taylor and Janice Burnham. Their visit took place in conjunction with Exuberant Politics.

WOLF is Deke Weaver’s third performance in his life-long project, The Unreliable Bestiary – a performance for each letter of the alphabet, each letter represented by an endangered species or habitat. The live event at Public Space One distills the sprawling 2013 installment WOLF into a one-man presentation – part live performance, part cinematic documentation.

Deke Weaver is a writer, performer, designer, and media artist. His interdisciplinary performances and videos have been presented in Australia, Brazil, Canada, Russia, Europe, and the United States at experimental theater, film/video, dance, solo performance, and broadcast venues such as Channel 4/U.K., the Sundance Film Festival, the New York Video Festival at Lincoln Center, The Berlin Video Festival, the Museum of Contemporary Art/LA, The Moth, and many others including livestock pavilions, night clubs, backyard sheds and living rooms. He has been a resident artist at Yaddo, Isle Royale National Park, HERE, Ucross, and the MacDowell Colony. His work has been supported by commissions, fellowships, and grants from Creative Capital, the city of San Francisco, the states of Illinois and New York, the University of Illinois (Urbana-Champaign), and other public and private foundations. He is currently an associate professor at the University of Illinois, Urbana-Champaign with appointments in the School of Art and Design and Department of Theater.

The Iowa City presentation of WOLF was co-organized with Kim Marra and funded by the Departments of Theater and American Studies, with co-sponsorship by Public Space One.

Josh MacPhee is a printmaker, curator, writer, and activist who uses art to inject protest politics into public discourse.

Emphasizing the street over the gallery, MacPhee’s visual and graphic work is accessible and eye-catching yet deeply political. His themes include social movement history, the environment, and militarism. Much more than a street artist, MacPhee is also a self-taught historian and curator of the visual culture of late twentieth and twenty-first century left politics. Founder of the Justseeds political graphics collective, MacPhee is author or editor of five books and curator of two major touring exhibitions on political art and the visual culture of protest. Since 1998, he has commissioned over 100 posters in the Celebrate People’s History series, which was published in book form in 2010.

Most recently, MacPhee co-founded the Interference Archive, a zine archive and exhibition space in Brooklyn that collects and displays socially-engaged art and activist publications. Through these diverse activities, MacPhee has built a remarkable creative practice centered less on his singular vision as an artist than on supporting the ideals that inspire him.

As part of Exuberant Politics, Josh MacPhee came to the Iowa campus for an extended visit that will include multiple opportunities to engage students, faculty, and the community in questioning how the arts and culture can address the most challenging and urgent questions facing our society today.

Steve Rowell is an artist, curator and researcher whose transdisciplinary practice focuses on overlapping aspects of technology, perception and culture related to the landscape. Rowell contextualizes the built and the natural environment, appropriating the methods and tools of the geographer, cartographer and geospatial analyst to produce hybrid works that combine visual, textual, and experiential approaches. In addition to his role as a Program Manager at The Center for Land Use Interpretation since 2001, he collaborates with SIMPARCH and The Of- fice of Experiments. Steve’s work (collaborative and solo) has been exhibited internationally at a range of galleries and museums, including Temporäre Kunsthalle and NGBK, Berlin; The 2006 Whitney Biennial and PS1, New York; Yerba Buena Center for The Arts, San Francisco; The Smithsonian American Art Museum, Washington, DC; The Barbican Art Centre and the Frieze Art Fair, London; The John Hansard Gallery, Southampton; Ballroom Marfa, Marfa; and The Center for PostNatural History, Pittsburgh. He is a recipient of a 2013 Creative Capital grant in Emerging Forms for his project “Uncanny Sensing, Remote Valleys.”

Steve’s visit to the University of Iowa included a field trip for Studio Arts graduate students to the Lost Mound Unit of the Upper Mississippi River National Fish and Wildlife Refuge, a former military base.

Gina Badger is an artist and writer working in the expanded field of sculpture and installation. She has presented work internationally, including at The Kitchen (NYC); LACMA (Los Angeles); Issue Project Room (NYC); and the London School of Economics and Political Science. Currently working between Toronto, Montreal, and various locations south of the 49th parallel, Badger holds degrees in art and visual studies from Concordia University and MIT. A collaborator at heart, Gina is a member of the Montreal-based Artivistic Collective, and is currently the editorial director of FUSE Magazine.

Steve Kurtz is Professor of Art at the University at Buffalo and a founding member of the performance art group, Critical Art Ensemble. He is internationally renowned for his work in bio-art and new media. He gained general celebrity in 2004 following his arrest by the FBI on baseless bioterrorism charges that were downgraded to mail fraud and eventually thrown out in 2008. His artwork and legal ordeal, along with the complex issues they raise, were the subject of the film Strange Culture, directed by Lynn Hershman Leeson.

Sam Gould is co-founder of Red 76, a multi-artist collective founded in Portland, Oregon in 2000. Red 76 stages group inquiries into American politics, culture, and history that blur the lines between artist and audience, aesthetics and research, and art and activism. With a wide-ranging practice that broadly addresses the nature of public space and public culture, the group’s work often transcend or transform the traditional gallery setting, using it as a springboard to create other types of cultural spaces.

Ashley Hunt came to Iowa City to perform “Notes on the Emptying of a City.” The performance that acts as a dismantled film, where a narrator pieces together the sounds, images and storytelling of a documentary before a live audience. A figure sits alone at a desk with a printed text and a laptop computer. What looks at first like a traditional slide lecture quickly turns into storytelling — a narrator recounting his experiences as an artist working with a group of social justice activists in the aftermath of Hurricane Katrina. Working from the intimate starting point of what it meant to be present in that time and space with a camera and microphone, and arriving at emerging economies of risk and catastrophe, it leads viewers through difficult questions of race, visibility and speech, the writing of history, and how the total political crisis of Katrina continues to speak to the state of our political lives.

Art Work: A National Conversation About Art, Labor, and Economics

Art Work is a single-issue broadside newspaper edited and published by the art collective Temporary Services intended to spark a nationwide dialogue about the conditions of artists’ labor. I worked with the local artist-run space Public Space One to coordinate distribution and a discussion of the issues raised in the paper.

Sara Black of Material Exchange speaks to their work with installations, games, designed objects or spaces, and direct exchanges. Projects by Material Exchange have been exhibited at the Smart Museum of Art, The Experimental Station, the Museum of Contemporary Art in Chicago, The Betty Rymer Gallery, Gallery 400, The Hyde Park Art Center, Threewalls, Eyebeam, The Park Avenue Armory, The DeVos Art Museum and others. Other projects include collaborative workshops or courses with art and design students at the Northern Michigan University, Illinois Institute of Technology, Harrington College of Design, Braddock Active Arts, The School of the Art Institute of Chicago, and Street Level Youth Media. Other members of Material Exchange include Alta Buden, John Preus, and David Wolf.

Using exhibitions and public events as platforms to generate discussion and action, People Powered develops sustainable projects at the interstices of art, community development, and environmental education. Based in Chicago, the group is a collaboration between Kevin Kaempf, Lora Lode, and Suraiya Hossain.