While somewhat outside (but sometimes anticipating) my core interest in landscape and spatial politics, the projects documented here represent other facets of my work. In particular, these pieces demonstrate my longstanding interests in radical pedagogy, grassroots and DIY communications, and the power and constraints of public speech.

A Call to Farms 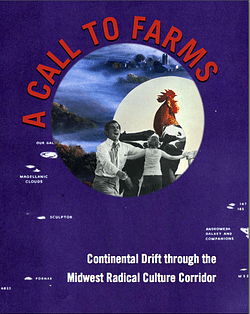 “A Call to Farms” is a sixty-page, self-published pamphlet reflecting on the first summer drift of what would soon be called Compass, a loose collaboration of artists and writers investigating the histories and futures of resistant culture in what we call the Midwest Radical Culture Corridor. I edited the pamphlet and coordinated its design and printing as well as contributing the introduction and concluding chapter. 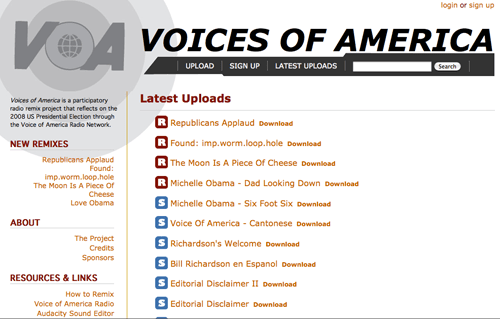 “Voices of America” was a web platform to promote and facilitate the remixing of coverage of the American elections generated by the government-funded Voice of America radio network. It was designed to allow international participants to ‘speak back’ to the historic, if still spectacle-driven, 2008 election and to give Americans access to this peculiar governmental self-presentation. The project culminated in an election day listening party. The website, thevoa.net, is no longer live, but a screenshot is posted here.

Proposal for a distributed network of solar microbroadcasting transmitters. Each unit can be made for less than $50 and  is designed to flood the airwaves of the immediate area with homegrown music, voices, noise, and sound. It is powered by a rechargeable battery and solar panel and housed in an ordinary circuit box to be mounted outside and left to its own devices for days or weeks at a time. Possible applications include covert political speech, alternative historical or environmental education stations, and direct public participation in the electromagnetic spectrum. Deploying a network of these low-cost transmitters around a neighborhood or a city opens up many practical and symbolic possibilities.

While microphones record museum murmurings in a square claimed as public, people gather to make public what before was merely space.

For the three-week duration of the MFA exhibition at the Krannert Art Museum, in Champaign, IL, participatory events occured daily in roaming public spaces around the city. Museum viewers become speakers by using microphones to rupture the spectatorship, privilege, and permanence of the public museum, and spectators become discussants by joining or questioning the gatherings. The sounds from each location are relayed to the other space to contrast the implicit or explicit limits on engagement established by those who monitor, manage, and control.